Santiago*—an asylum seeker who was wrongfully detained by ICE—was released on bond through powerful legal advocacy made possible through BorderX, an initiative of the Innovation Law Lab, and the expert representation of Linda Rivas, executive director and managing attorney at Las Americas Immigrant Advocacy Center in El Paso, Texas.

Santiago crossed the border and requested asylum in September 2017, at which point ICE sent him to an adult immigrant detention center. “ICE detention is a terrifying black hole for the majority of immigrants forced to endure it,” said Ian Philabaum, program director at the Innovation Law Lab. “Limited access to counsel, horrific conditions, and a lack of communication with support networks are all used as tools to coerce people eligible for relief to self-deport.”

Thanks to intentional and coordinated advocacy efforts on the part of many organizations and individuals, including Santiago himself, Santiago’s case was not lost in the black hole of immigrant detention. Advocates that work along the U.S.-Mexico border alerted the Innovation Law Lab of Santiago’s case early on, and the Innovation Law Lab coordinated with Las Americas to win his release on bond.

Even so, Santiago spent over six months in unlawful detention before a judge was compelled to authorize his release in accordance with the law. “Under the law, an asylum-seeker should not be imprisoned unless they are a danger or a flight-risk,” said Stephen Manning, executive director of the Innovation Law Lab, “But following the law would mean less profit for the private prison industry.”

The Trump Administration continues to expand for-profit detention and continues to unlawfully detain asylum seekers like Santiago. At any given time there are upwards of 30,000 adults in immigrant detention centers, with over 70% held in facilities operated by for-profit prison companies, two of the largest being the GEO Group and CoreCivic (formerly CCA).

“There are simply not enough attorneys to represent everyone in immigrant detention; the nonprofit sector in the area is especially limited” said Rivas. “BorderX has enabled Las Americas to take on more cases like Santiago’s completely free of charge.”

Santiago has now been reunited with loved ones, and will be able to continue to pursue his asylum claim outside of detention.

BorderX is a collaborative representation model designed to win release from detention for adults in immigrant detention centers. To learn more, click here.

The Trump Administration has, in stark terms, weaponized COVID-19 against the lives of immigrants and the communities in which they […] 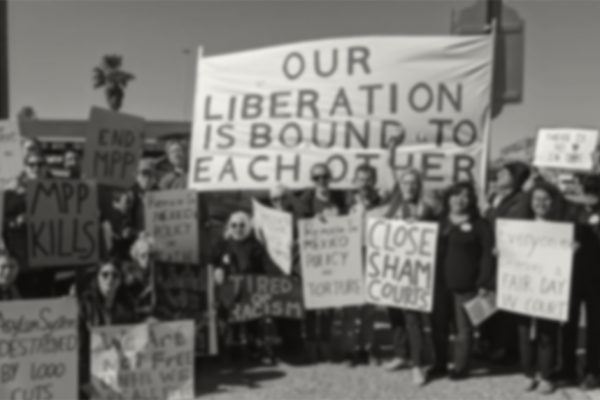 The Biden Administration must welcome Haitian asylum seekers with dignity, cease all expulsion and deportation flights to Haiti immediately and […]