Why Vote No on 105: A Lesson from Oregon’s History 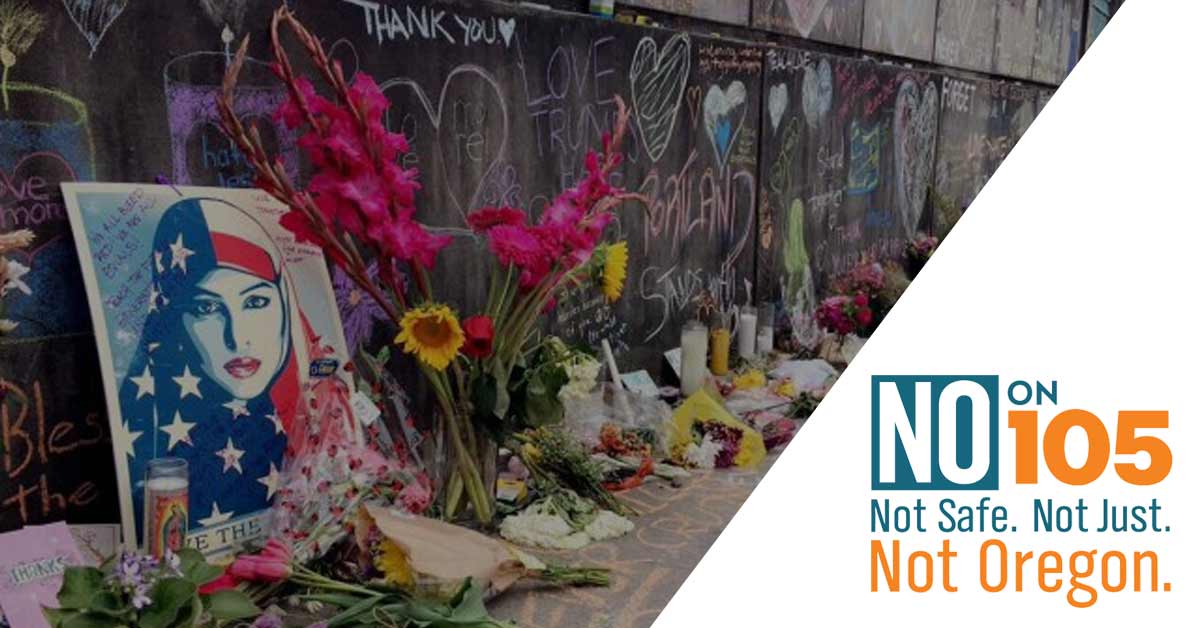 Oregon has a long, shameful history of racial exclusion and oppression. When Oregon became part of the union in 1859, it was explicitly “whites only.” A few years earlier, Oregon passed the infamous “lash law,” dictating that all non-white Oregonians were to be whipped twice a year until they left the state. A 1862 law required Chinese and Hawaiian immigrants and black residents to pay an annual tax to the state; if they couldn’t pay, they were forced into road maintenance crews. In the 1920’s, the state had the highest per capita KKK membership in the country, and law enforcement and city leaders publicly affiliated themselves with the organization.

Oregon’s recent history is not much better. In 1977, police regularly detained perceived immigrants, refusing to let them go until INS could review their documentation (a process which could often take days). On January 9th of that year, Delmiro Trevino, a US citizen of Mexican descent, was interrogated at the Hi Ho Restaurant in Independence, OR. He was grabbed by a deputy and forced to stand in the center of the restaurant in front of other customers, and was released only after he was identified as a “long-time resident” of Independence.

A 2010 report to Portland’s Human Rights Commission found that Multnomah County’s communities of color had “alarming disparities across all systems and institutions, with trends worsening through time.” In 2016, statewide unemployment and poverty rates were shown to be higher for Latino than white Oregonians. In 2018, Ana del Rocia, a Latina elected official, was arrested after a routine TriMet fare check escalated based on a dispute about her name.

Oregon’s Disentanglement Statute (ORS 181A.820) helped forge a path toward a more inclusive Oregon. The statute prohibits local law enforcement from detaining or apprehending someone based solely on their perceived immigration status, focusing limited local resources and money on investigating and preventing crime. Instead of repealing ORS 181A.820, as Measure 105 seeks to do, efforts should be made to strengthen this law.

Protecting Oregon’s communities of color makes everyone safer. Research has repeatedly shown that when communities of color don’t trust law enforcement, everyone suffers. Fear of deportation prevents immigrants, documented or not, from reporting crimes and cooperating with law enforcement. The Woodburn police chief has expressed concern that his department would be negatively affected, were Measure 105 to pass, explaining “it would have a significant impact on the quality of life of our community if the majority of the population quit interacting with police.” A clear division between local law enforcement and federal immigration efforts is essential in reducing crime and protecting communities. Furthermore, research shows that disentanglement policies correspond with a higher level of economic well-being.

Measure 105 threatens a return to the show-me-your-papers era of Oregon’s racist past.  Oregon is now a battleground for laws that limit local government cooperation with ICE. Measure 105 is backed by a national anti-immigrant hate group, Federation for American Immigration Reform (FAIR). FAIR is engaged in a nationwide effort to undermine and attack disentanglement laws, end birthright citizenship, and exclude immigrants and their children from full and fair participation in our democracy and social institutions. Oregon was a bellwether state 31 years ago when it passed the country’s first disentanglement law. Defeating Measure 105 will signal that Oregon will not be deterred in protecting and defending the rights of its residents.