Help build the technology to
defend the rule of law

Help us build the technology we need to defend the rule of law. We can harness the power of technology for good with your help.

Through the use of technology, we were able to connect Oralia, Oscar, Andrea, Hamidou, and people like Francisco with lawyers and activists.

The Trump Administration’s objective of mass deportation — particularly the mass deportation of immigrants from communities of color — is taking effect across the country. By building the apparatus of mass incarceration, creating pathways that socially, legally, and politically stigmatize immigrant communities of color, and eliminating courts and access to lawyers, the once theoretical possibility of removing 11 million people from the United States — most with deep ties to the community — is actually becoming a reality.  The impact on our civic institutions and rule of law norms is and will be profound and deeply scarring.

Technology–long an after thought in defending the rule of law–plays a vital and critical role. The Law Lab uses a Rights Architecture framework that supports collaborative data intake and analysis across organizations  in order to transform the practice of lawyers and organizations working alone in the wild into a massive collaborative site of resistance that aims to create universal representation, improves client outcomes by tracking and supporting cases to and thru placement, develops powerful data-informed public narratives to shape public policy and enhances litigation to promote rule of law for immigrant communities, particularly immigrant communities of color. 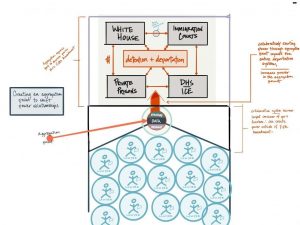 You can help us create a supermassive collaborative resistance that uses technology to aggregate data, relationships and, essentially, power to create a due process-centered counter-structure to the unfair and unjust deportation system. 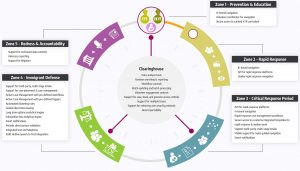 The ultimate result will be an immigration adjudication system centered on fairness instead of a machine intended for mass deportation.

Massive Collaborative Representation is a model designed and developed by the Law Lab and deployed around the nation that resists unjust and unfair deportations through rapid scaling, direct representation, and data-driven policy & litigation. The model has been studied extensively.  It is the model used at the Sheridan Pro Bono Project that achieved 100% grant rates and 97% release rates, the Dilley Pro Bono Project that has represented over 100,000 women and children, the Artesia Pro Bono Project and elsewhere. It uses the LawLab application to create an aggregation point of lawyer-client relationships in order to permanently change power-dynamics in the deportation system. It minimizes the “lawyers alone in the wild” phenomena. The model aggregates lawyer to lawyer, client to client, and lawyer-client to lawyer-client relationships into a single structure (with the LawLab application as a primary mechanism for the aggregation) to become the largest unified consumer of the government function which builds substantial power for immigrant organizations seeking fairness.