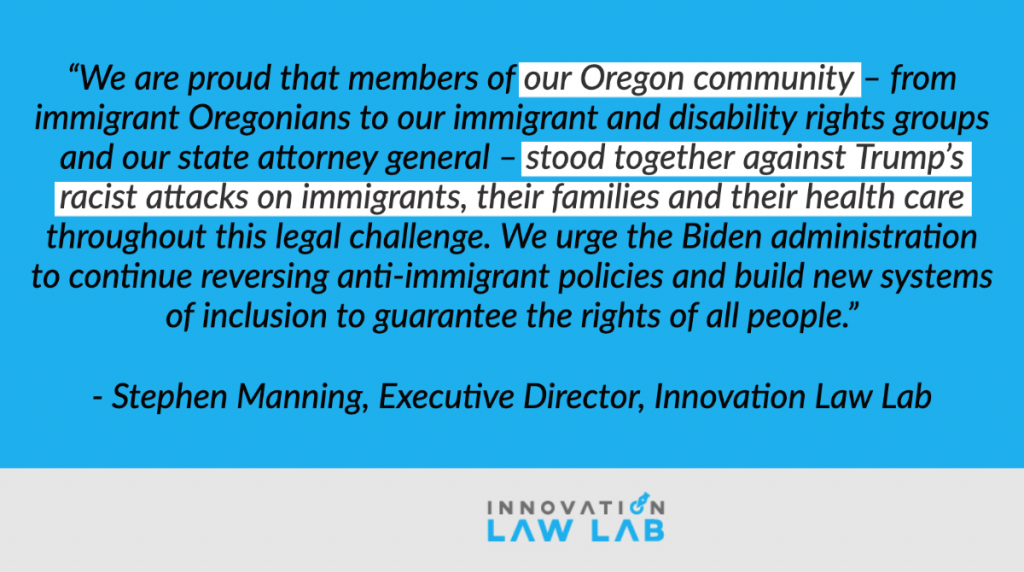 WASHINGTON D.C. –– Last night at midnight, former President Trump’s ban on nonimmigrant visas expired. Last month, President Biden revoked the proclamation that barred the ban on immigrant visas. With the expiration of Proclamation 10052, many categories of nonimmigrants will no longer be prevented from seeking entry to the United States due to the false premise that they will impede our country’s economic recovery caused by the COVID-19 pandemic.

Former President Trump first signed Presidential Proclamation 10052 on June 22, 2020. On December 31, he extended it through March 31, 2021. Along with the immigrant ban, Proclamation 10052 drastically reduced visa issuance and entry for immigrants and nonimmigrants from around the world.  The entry bans separated thousands of families, impeded businesses trying to hire and retain employees, and disrupted the economy. According to the Trump administration’s own estimates, the entry bans may have prevented approximately 525,000 foreign nationals from lawfully entering the United States. Experts estimated that it prevented about 20,000 employers from bringing needed workers into the United States.

Last July, our civil rights coalition of the American Immigration Lawyers Association (AILA), Justice Action Center (JAC) and Innovation Law Lab, with pro bono support from Mayer Brown LLP, filed Gomez v. Trump, the first lawsuit challenging the entirety of the Trump administration’s immigration ban. Over the past year  we have been fighting in the courts for all our plaintiffs, who originally included children at risk of “ageing out,” and now encompass family-based immigrant visa applicants, diversity visa winners, and businesses who employ nonimmigrant temporary workers.

We celebrate today for nonimmigrants who no longer have a categorical ban on their entry  to the United States.  At the same time, we will continue to fight for the 2020 class of diversity visa selectees before the district court.

“With the remainder of this visa ban now ending, we hope that international educational and cultural exchange programs such as ours can now resume,” says Bill Gustafson, President & CEO of ASSE and EurAuPair, a plaintiff in Gomez v. Trump whose businesses virtually shut down when the immigration ban was in place. “It is imperative that these programs organized here for thousands of overseas university students and recent graduates anxious to come to America for this coming summer must immediately commence getting their student J-1 visas. U.S. consular offices must now immediately begin processing these visas. If this does not happen, thousands of American host businesses, summer camps, host families and organizations, not to mention excited foreign exchange participants, will be sadly disappointed.”

Esther Sung, Legal Director for Justice Action Center, says, “We are relieved that President Biden has allowed another one of former President Trump’s odious bans to fall. Doing so allows this country to take another step back to a functional immigration system that allows employers to recruit brainpower and manpower from around the world to power our economy and fuel the engines of our innovation. The sunset of the nonimmigrant visa ban also allows the reunification of numerous families who had legal visas, but who had members caught on the wrong side of the border when the ban went into effect with no notice last year.”

“The nonimmigrant entry ban was based on a false premise that foreign nationals take away jobs and hurt the American economy,” says Jesse Bless, AILA’s Director of Federal Litigation. “Unfortunately, the false premise caused true damage to U.S. employers and their employees who were prevented from lawfully entering the country. The Biden Administration needs to take affirmative steps to redress those wrongs quickly and efficiently to help our recovery from the pandemic.”

“While we are thrilled that the Biden administration has finally lifted the cruel and unlawful bans on immigrant and nonimmigrant visas, the harm inflicted upon families traumatized by these bans remains unaddressed,” says Jordan Cunnings, Staff Attorney at Innovation Law Lab. “We will continue to fight in court for our class members, who deserve the chance to pursue their hard-won opportunity to immigrate.”

More information about the lawsuit, including case filings, can be found here.

Innovation Law Lab is a nonprofit organization that leverages advocacy, technology and law to fight for immigrant and refugee justice. By bringing technology to the fight for justice, Innovation Law Lab empowers advocates to scale their impact and provide effective representation to immigrants in detention and in hostile judicial jurisdictions across the country.