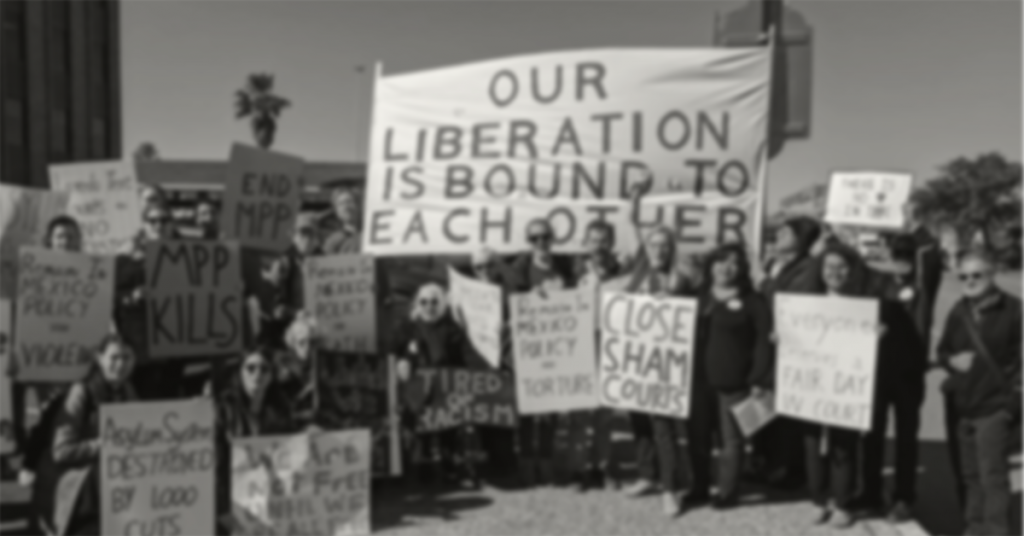 ESTANCIA N.M. –– Last Friday, November 5th, a group of immigrant rights advocates and organizations delivered a letter to Immigration and Customs Enforcement (ICE) demanding access to legal services for Haitian migrants detained at Torrance County Detention Facility in New Mexico. ICE  has repeatedly denied access despite multiple attempts by advocates to speak and meet with the migrants, many of whom were detained at or near Del Rio, Texas, in September. The letter demands that ICE  halt the deportation of Haitians until they have had an opportunity to consult with counsel, that ICE grant access to pro bono attorneys to meet with all Haitian migrants at the facility for group and individual legal consultations within five days of the request, and that ICE ensure Haitians’ access to confidential legal calls. Attorney Allegra Love and immigrant rights groups Innovation Law Lab, National Immigration Project, Haitian Bridge Alliance, the ACLU of New Mexico, and the American Immigration Council delivered the letter.

As of September 30th, based on interviews with migrants in the facility, the groups believe there were at least 45 Haitians detained at Torrance. In addition to ICE’s denial of their access to legal support, local groups have observed court dockets for Black migrants from Haiti moving disproportionately fast, leading to unfair, rapid deportation orders. Haitian detainees describe poor food, inadequate medical care and mistreatment, common to Torrance and ICE detention centers nationwide, as well as insufficient access to information in Haitian Kreyol, which together amount to racist discrimination and violate even ICE’s own standards.

A 25-year old Haitian man detained at Torrance by ICE, who wished to remain anonymous for fear of retaliation, said “If I don’t have an attorney I think that they can deport me. I don’t know what asylum is. I wasn’t allowed to speak. Nobody explained anything and they just told me I was supposed to have an attorney. I don’t want to go back to Haiti. I can’t go back. My family member was killed and his house was burned. My mom has just been crying because I cannot go back. If I go back I can’t even leave the airport.”

The immigrant rights groups that signed and delivered the letter made the following statements:

“For the last 42 days I have been begging ICE to provide us with information and access to the Haitian men detained at Torrance so we can provide them with critical pro-bono legal assistance and meeting resistance each step of the way. ICE is doing everything it can to deport these Haitian men without any semblance of due process. It’s racist, it’s wrong, and I am fed up with it. Torrance is a black box, especially for Black migrants.” – Allegra Love, immigration attorney

“It is unconscionable for ICE to block access to legal counsel for these Haitian asylum seekers who have already suffered horrific treatment at the hands of the U.S. government just for seeking protection from harm. By rushing their cases the government seems determined to deport these men to Haiti, where they face abuse and potentially even death, without due process and in some instances before they have even had a chance to talk to an attorney or submit their asylum application.” -Rebecca Sheff, Senior Staff Attorney at the ACLU of New Mexico

“At least 45 Haitian asylum-seekers are currently detained at Torrance County Detention Facility where they are being denied access to legal support and fast-tracked for deportation. Immigration detention needlessly deprives thousands of immigrants their liberty each day and the situation at Torrance further highlights how Black migrants are disproportionately impacted by an immigration system that is inherently cruel and racist. Our demands in this letter are clear: ICE must immediately halt the deportations of Haitian migrants at Torrance County Detention Facility and allow them access to the legal services and support they need.” – Sirine Shebaya, Executive Director of the National Immigration Project.

“This type of abuse, anti-Black racism and denial of rights against Haitian asylum seekers in Torrance County Detention Facility is commonplace in ICE detention. We receive calls from Haitians reporting similar abuse everyday from ICE facilities throughout the country, which almost always results in unfair deportations. But the abuse is rarely detected or reported. Through the brilliant work of Allegra Love and the courage of these migrants, we present this case to ICE as an opportunity to review their procedures and practices to assure that all migrants, in Torrance and throughout the country, have equal access to legal counsel and a fair chance to apply for asylum. It is paramount that none of these 45 or so Haitians is deported pending access to legal assistance.” – Nicole Phillips, Legal Director, Haitian Bridge Alliance

“Many in the US have no idea that our government is running what amount to black sites designed to isolate and deport migrants. ICE has forcibly disappeared Haitian asylum seekers at Torrance, holding them in terrible conditions and hiding them from pro bono attorneys in an effort to swiftly send them back to a country reeling from a violent political crisis, earthquake and powerful tropical storms. This is not how we believe the US should treat anyone, including Black migrants seeking safety. As long as immigration detention exists, we will join people in their fight for freedom.” – Casey Mangan, Immigrant Justice Corps Fellow at Innovation Law Lab

Innovation Law Lab, based in Portland, Oregon with projects around the United States, is a nonprofit organization that harnesses technology, lawyers and organizers to advance immigrant and refugee justice. For more information, see www.innovationlawlab.org and follow us on social media: Innovation Law Lab on Facebook and @ThinkLawLab on Twitter.

Haitian Bridge Alliance (HBA), also known as “the Bridge”, is a grassroots community organization that advocates for fair and humane immigration policies and provide migrants and immigrants with humanitarian, legal, and social services, with a particular focus on Black migrants, the Haitian community, women and girls, LGBTQIA+ individuals, and survivors of torture and other human rights abuses. HBA also seeks to elevate the issues unique to Black migrants and build solidarity and collective movement toward policy change. Anpil men, chay pa lou (“Many hands make the load light”).

The ACLU-NM is the New Mexico state affiliate of the ACLU, the nation’s premier civil rights and civil liberties organization. The purpose of ACLU-NM is to protect and advance justice, liberty and equity as guaranteed by the constitutions of New Mexico and the United States.  We work to make justice, liberty and equity realities for all people in New Mexico, with particular attention to the rights of people and groups who have historically been disenfranchised. For more information please visit www.aclu-nm.org

The American Immigration Council works to strengthen America by shaping how America thinks about and acts towards immigrants and immigration and by working toward a more fair and just immigration system that opens its doors to those in need of protection and unleashes the energy and skills that immigrants bring.