by Stephen Manning — Posted in Rights Architecture Sheridan on June 18, 2018 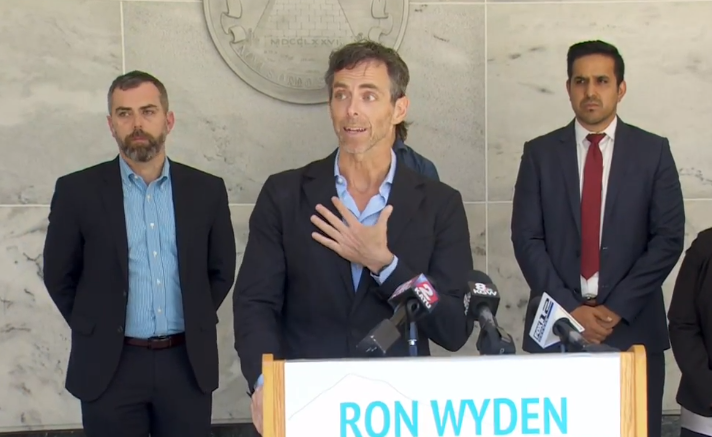 On Sunday, June 17, Senator Ron Wyden met with a group of Oregon immigration experts advocating for the rights of the men at FCI Sheridan. Experts included Stephen Manning and Ian Philabaum of the Innovation Law Lab, Mat Dos Santos of the ACLU of Oregon, and Chanpone Sinlapasai and Luis Garcia of the law firm of Marandas Sinlapasai.

In a press conference following the meeting, Stephen Manning acknowledged the outpouring of support from the Oregon community: “Within days of the announcement that there were going to be asylum-seeking men held at [the Sheridan] facility, more than 300 Oregonians have already stepped up. We will be able to provide free lawyers for every person that is detained in that facility.”

The challenge that remains is connecting immigrants at FCI Sheridan with pro bono attorneys. Currently, there is no way for individuals in detention to make a phone call to an attorney and attorneys wishing to visit potential clients have been turned away. Stephen explained, “We need the government to meet us halfway and provide the constitutional baseline of access.”

Luis Garcia, who visited FCI Sheridan last week at the invitation of the Mexican Consulate, noted that some of the men had been separated from their children. “As a new father, it is extremely difficult for me to drop my child off at daycare. I cannot imagine what these individuals are going through where they haven’t seen their relatives or children for over two months.”

Luis further added, “Our government is accomplishing what cartels and gang members were not able to do, and it is destroying families and separating them.”

Please direct any inquiries to at ramon@innovationlawlab.org.

The simple promise that ended mass deportation in Sheridan

Dear friends, The Trump Administration hatched a plan to deport as many immigrants as fast as they could. Their plan […]

Innovation Law Lab, together with attorneys from Oregon Law Center, recently obtained a victory for the taxpayers in Wasco County […]