“It matters what you call a thing” 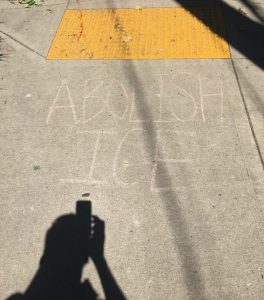 Iranian-American poet Solmaz Sharif writes “It matters what you call a thing.” Chalked into a Portland sidewalk beside makeshift tents at an Abolish ICE rally is the phrase “no human is illegal.” In court proceedings,representatives for the Department of Homeland Security referred to the immigrants detained at Sheridan as “aliens.”

Working as an intern at the Innovation Law Lab over the past several weeks, I’ve tried to keep at the top of my mind the central absurdity that we’re fighting – the fact that over a hundred immigrants are being held in a federal prison in Sheridan, Oregon as a result of the policies of the current administration. And I’ve turned to Solmaz Sharif’s writing to try and understand why this is happening, to move beyond my initial feelings of indignation and outrage.

Because of her poetry, I’m reminded that names matter. Illegal or undocumented. Inmate or immigrant. Alien or refugee. Names matter because they reveal who we consider as human, who we believe is deserving of basic freedoms and constitutional rights.

In my mind, the atrocities of Sheridan – while horrifying – did not emerge out of nowhere. These atrocities required a systematic process of dehumanization, one in which refugees of color fleeing persecution could be classified as criminal, illegal, and undeserving of protection even before they arrived on United States soil.

The workings of this process can be found in the acts of definition which saturate court hearings, where the meaning of a name has high stakes – where what Attorney General Jeff Sessions considers “a particular social group” can affect the fates of thousands of Central and South Americans fleeing gang violence; where what constitutes the beginning of “removal proceedings” can determine who gets to speak to the immigrants being held at Sheridan. The workings of this process can be traced to the moments where a human being becomes an alien, where an asylum seeker becomes an illegal, where a refugee becomes a migrant who didn’t do it the right way.

And in light of this systematic dehumanization of individuals seeking protection from violence and persecution, it is our task to continue to imagine a more radical definition of the human – one which includes immigrants, instead of turning them away.

This post was written by Ethan Chua, summer intern at Innovation Law Lab. Ethan is a junior at Stanford University, where he studies anthropology, linguistics, and poetry.

The simple promise that ended mass deportation in Sheridan

Dear friends, The Trump Administration hatched a plan to deport as many immigrants as fast as they could. Their plan […]

Make a Gift to the Law Lab Bond+ Fund In late May, 123 immigrants were detained at the federal prison […]